This song is an arranged version of “Pavane pour une infante défunte” for mixed chorus ensemble. A female vocal ensemble version is collected in the CD “ANENONE” by Choro Annex.

Here I wrote music to Misuzu Kaneko’s poem “Warahi”. A fluid melody is accompanied by the minimalistic piano in an irregular meters — an alternative approach to compose a Japanese song that does not have a strophic form. This audio was sung by Yumiko Mori (soprano).


This song is included in the CD Warahi (2010), an album collection of pieces that I wrote, arranged and played. This piece contains sounds and noise from various sources, such as a toy piano, percussion instruments, an abandoned upright piano found in the park, and the echo recorded in a Karaoke room.

"Hoshi no Yo (The World of Stars)" is a Japanese version of the hymn "What a Friend We Have in Jesus" translated by Daishi Sugitani (1874-1915). This arrangement of mine is a medley of the Japanese translated version with its English original.

"L'officier de chien (Mr. Policedog)" was premiered at the August 2018 concert of ”Sucré ou Salé ?”, a duo group of Midori Kubota and Ayako Kosaka.
This French version of the Japanese children song (“Inu no Omararisan” ) has an “after story” more suitable for adults. Take notice of the unsettling arrangement with a mystical air.

Further in Summer than the Birds (for flute, violin and cello)
2008
Composition

"Further in Summer than the Birds" was premiered by Jun'ichiro Taku (fl), Yasutaka Henmi (vn) and Tomoki Taku (vc). The score was notated after the recording was done. This is my first work written by that procedure.

A piano solo version of “What a Friend We Have in Jesus” arranged with intricate harmonies. The score is beautifully illustrated.

"Waltz for Augustine" was premiered  at the September 2018 concert of ”Sucré ou Salé ?”, a duo group of Ayako Kosaka and myself. This is the main theme of the movie "Le Chateau de Ma Mère" directed by Yves Robert based on Marcel Pagnol's autography. "Augustine" is the name of Marcel's mother. In waltz time he sings of his affection for his mother which permeates the whole movie.

Midori Kubota’s first solo performance, which she enacted at Koen-Dori Classics, centers on American experimental music.  Some of the performance works are her own composition, some commissioned by Tomomi Adachi and Tomoko Hojo.
She explored various possibilities on the ways musical scores can be read, in an attempt to destabilize and shed light on the processes of reading and playing the scores. 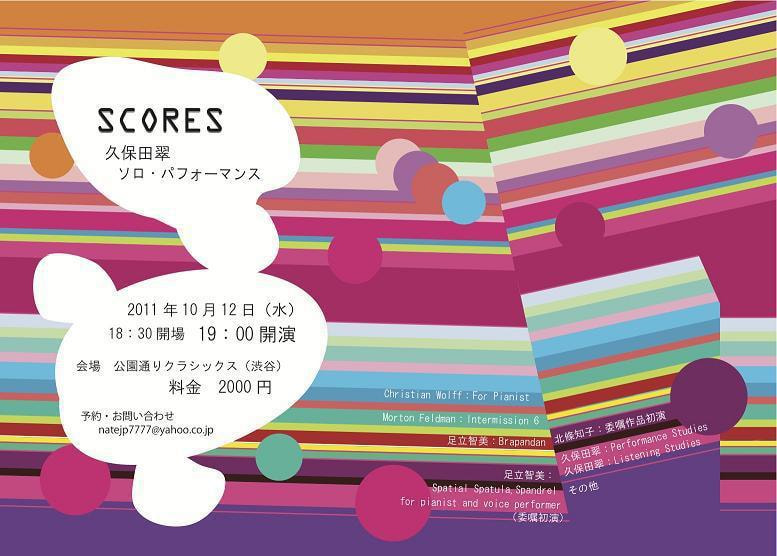 
Ensemble for Experimental Music and Theater
2011~
Performance and composition

Ensemble for Experimental Music and Theater (EEMT) is based around the questions of “theater” and “notation,” propounded by John Cage. The Ensemble is engaged in the critique and reconstruction of the genealogy of conceptualism and minimalism from Fluxus, Scratch Orchestra, earlier Minimalist music to the stream after Wandelweiser Group. As an active member of the Ensemble since 2011, Kutoba has been writing and performing some of her daring creations.

Ensemble for Experimental Music and Theater

The Cossack Dance of the Elephant and the Mouse
2017
Composition

A piano solo piece for children. It depicts humorously an elephant and a mouse dancing together. Premiered by the composer herself.

The Cossack Dance of the Elephant and the Mouse

A piano solo piece for children.  Composed with a memory form NYC subway platform in mind, this is meant to be a jazz piece easy enough for children to play.

Listening to a Jazz Band on a NYC Subway Platform